(COLOMBO, LANKAPUVATH) –DentsuGrant celebrates their milestone 60th Anniversary, marking them as the longest running agency in the country.

They have been leading the industry throughout this time as well as building iconic brands and addressing social causes that have helped shape the country. This year, their legacy takes a new turn as they were acquired by the global advertising and media giant, Dentsu Aegis Network.

This Japanese-British agency is one of the most innovative and future forward companies in the world today. The staff of the DentsuGrant Group were out celebrating in grand style at the Bayleaf Colombo to celebrate the milestone. The staff were brought across town in style on a double decker party bus! The party kicked off with a touching tribute to the Founder Chairman, Deshabandu Reggie Candappa, and then continued on with fun and games throughout the afternoon.

The day’s activities culminated in an exclusive dinner for the General Management Committee at the Merchants of Baillie Street restaurant. 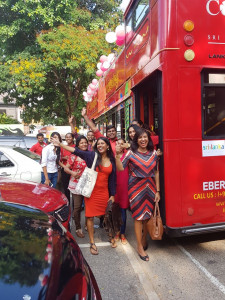 Inbound flights to be limited to one a day

Aruwakkalu sanitary garbage dump to be ready next September