(COLOMBO, LANKAPUVATH) –The Embassy of Sri Lanka joined 52 other embassies on Saturday to open its doors to the public as part of the annual Passport D.C.: Around the World Embassy Tour.

The event offered the opportunity to showcase Sri Lanka in a cultural nutshell, ranging from arts and crafts and traditional drum performances to the country’s world heritage sites and popular delicacies​​​​ the island has to offer.

As was expected, the sari corner was a hive of activity, where ladies were eager to be clad in colourful Sri Lankan traditional attire – the osari and the sari – and have their photos taken.

This only took second place to the throngs at the live action stations, where the Sri Lankan “hopper”, the popular bowl-shaped pancake made its Passport D.C. debut.

Combined with a cup of refreshing Ceylon tea, the several delicacies on offer such as string hoppers, milk rice and vadai, along with the hoppers, did not fail to lift the spirits of the travel-weary visitors who were spending the day “embassy-hopping”, and provided a unique culinary experience to all those who stepped inside the Embassy.

The Embassy welcomed approximately 3000 visitors at this year’s open house. 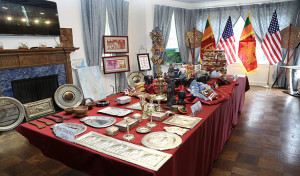 AstraZeneca vaccine will be distributed on Friday