(COLOMBO, LANKAPUVATH) – National Development Bank PLC was crowned as Sri Lanka’s Best Bank 2021 by the prestigious Global Finance Magazine of USA, in its 28th edition of awards for the World’s Best Banks.

This much-coveted win by NDB closely follows the Bank being recognized as The Bank of the Year Sri Lanka 2020 in December 2020, by renowned The Banker Magazine of UK’s annual Bank of the Year Awards – dubbed as the Oscars in the banking and financial services industry. Accordingly, NDB becomes the incumbent holder of both these defining awards simultaneously, given away by two of the most seminal publications in the world, a feat rarely achieved by a bank. This achievement affirms the significant impact and contribution NDB is making to the Sri Lankan banking sector, as the fourth largest listed banking entity in the country, 40 years young with agility and nimbleness whilst embracing novelty to stay continually relevant in the rapidly evolving industry landscape. 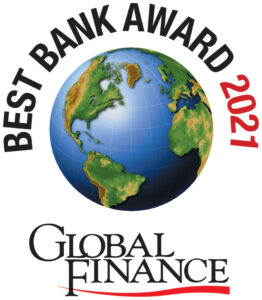 With this win from Global Finance, NDB joins an elite group of best banks from their respective countries across the globe, such as DBS of Singapore, Commonwealth Bank of Australia and Bank of America of USA. Being recognized as the Best Bank in Sri Lanka attests to NDB’s excellence in financial performance and equally important – its support to key stakeholders and the community in the unprecedented challenges brought about by the COVID-19 pandemic.

Expressing his views on this exceptional achievement, NDB’s Director/ Group Chief Executive Officer, Mr. Dimantha Seneviratne stated that NDB and its team is encouraged to be recognized by this awards programme, which garners much respect as one of the most independent and objective evaluations in the industry. He stated that this is a clear reflection of the equilibrium in performance that the Bank has maintained through the toughest of times, without any aspect being compromised on. I wish to express my heartfelt gratitude to all our customers, shareholders and other stakeholders, and also the passionate and dedicated NDB Team, for taking the NDB brand to the global arena and for making great achievements a possibility, he further stated.

In a statement made by Joseph D. Giarraputo, publisher and editorial director of Global Finance it was stated that “banks are playing a key role in economic recovery around the world. Our Best Bank awards highlight the leaders in restoring growth and mapping a way forward. This year’s evaluations are more important and valuable than at any point in their 28 year history, given the unprecedented economic conditions wrought by the global pandemic”, he went on to state.

In further elaborating the mechanism that led to the meticulous selection process, a Global Finance Press Release stated that the winners of this year’s awards are those banks that attended carefully to their customers’ needs in difficult markets and accomplished strong results while laying the foundations for future success. All selections were made by the editors of Global Finance after extensive consultations with corporate financial executives, bankers and banking consultants, and analysts throughout the world. In selecting these top banks, Global Finance considered factors that ranged from the quantitative objective to the informed subjective. Objective criteria considered included: growth in assets, profitability, geographic reach, strategic relationships, new business development and innovation in products. Subjective criteria included the opinions of equity analysts, credit rating analysts, banking consultants and others involved in the industry, the Press Release further stated.

Notwithstanding the challenges of the pandemic, the NDB group posted strong financial performance for year 2020, whilst delivering essential support to its wide customer base in helping them revive and thrive in the new normality. NDB emerged as the fourth largest lender under the Saubhagya COVID-19 Renaissance Facility – aimed to provide vital support in working capital requirements of businesses affected by the pandemic, affirming NDB’s commitment to ensure customer well-being at all times.

NDB “Jayagamu Sri Lanka” dedicated to empowering exporters, inventors and SMEs, “Sri Lanka Vanithabhimana” aimed to recognize trailblazing women of Sri Lanka, “Let’s Grow” reforestation project as a part of the Bank’s corporate sustainability endeavors are some clear examples of NDB’s resolution and power to perform. NDB has also made progressive strides in the digital banking sphere, in bringing convenience-defining digitized banking solutions to its customers and efficiency-enhancing processes in its internal operations. The Bank’s agility and aspirations augmented by precise execution have propelled it to become one of the most digi-savvy banking institutions in the country.

With a Rights Issue and plans to onboard a European based development financing institution – Norwegian Investment Fund for Developing Countries (Norfund) which will result in a minimum equity capital infusion of LKR 8 Bn announced, NDB is set to achieve greater results, whilst delivering added value to various stakeholders, as Sri Lanka’s premium banking and capital market services group. NDB’s performance excellence across multiple aspects have been recognized by over 60 local and international awards, making NDB one of the most decorated brands in the country.

(LANKAPUVATH | COLOMBO) – India’s ‘Constitution Day’ was observed through a series of events organized by High Commission of India, Colombo on 26 November 2022. The special day marked the adoption of the Indian Constitution on 26 November 1949.

Import ban on 78 items including refrigerators, clothing, and perfume removed