What is a Free Trade Agreement ?

What is a Free Trade Agreement ?

A Free Trade Agreement is an agreement between countries or groups of countries for the reduction of barriers to trade between them.

An FTA does not mean that all trade barriers are reduced, ie that imports and exports can flow completely tax free between the nations concerned.  Rather both parties work together to decide on terms and offer special concessions where possible.

Under an FTA there maybe categories where import duties are eliminated and others where they are simply reduced. There is also typically a negative list – items which will not be covered by the FTA where no concessions are offered.

These agreements increased trade but  have  not fulfilled their full potential.

The Indo-Sri Lanka Free Trade Agreement (ISFTA) was signed on 28th December 1998 and entered into force with effect from 1st March 2000. While Sri Lankan exports to India increased from around $200 million to over $600 million under the FTA – the growth has been gradual and uneven.   A large number of Indian goods are imported to Sri Lanka outside the FTA mechanism and several Sri Lankan export segments have not benefited from the FTA.

Pakistan-Lanka FTA.  Operational from June 12, 2005.  206 Sri Lankan products enjoy duty free access to the Pakistani market including tea, rubber and coconut. 102 Pakistan products can be imported to Sri Lanka duty free.   Under the FTA growth of Sri Lankan exports to Pakistan has been marginal from $40-50 million in 2004 to $60-70 million at present. Pakistans exports to Sri Lanka have  doubled over the same period but there is potential for considerable further growth.

Asia Pacific Trade Agreement – APTA  Multilateral FTA coveringBangladesh, China, India, Laos, South Korea, and Sri Lanka. Sri Lanka has been a member since 1975 – the block works to lower barriers between members via mutual agreement the last round of negotiations were in 2009.

South Asian Free Trade Area (SAFTA) ratified in force from January 2006.   Afghanistan, Bangladesh, Bhutan, India, Maldives, Nepal, Pakistan and Sri Lanka (a combined population of almost 2 billion people). The original objective was to lower trade barriers between member nations with customs duties on all traded goods to be reduced to 0 by 2016.  Progress towards the zero tariff objective has been limited and disagreements among SAFTA’s most powerful members Indian and Pakistan have prevented significant progress. Trade between SAARC countries has not grown at the desired pace with most SAARC countries trading far more outside the SAARC regionn than within it. 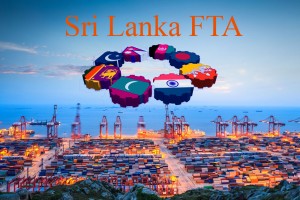 The government envisions that through the FTAs foreign investors might use Sri Lanka as a base for trade, adding value in Sri Lanka and re-exporting goods to countries covered by the FTAs.

The aggressive pursuit of these agreements is in-line with the Sri Lankan government policy of establishing the country as a regional trading hub.  With no new FTAs finalized since the Pakistan-Lanka FTA in 2005 Sri Lanka has considerable potential to improve its trading prospects with new FTAs.

5 new FTAs are currently being negotiated – we take a closer look at some at these agreements and their current status.

LIOC suspends sale of petrol in cans, containers and bottles

(LANKAPUVATH | COLOMBO) – Amidst the shortage of petrol persisting in the country, Lanka IOC (LIOC) has decided to suspend the sale of petrol in cans, containers, or bottles with immediate effect.

A proposal to amend the Standing Orders increasing powers of all Committees including COPE and COPA will be presented soon – Hon. Dinesh Gunawardena, Leader of the House

The Committee on Public Finance decides to summon CBSL Governor, the Secretary to the Ministry of Finance and other officials next week

No power cuts after 6pm during O/L exam period – PUCSL

PM’s Office to cut expenditure by 50%

Harsha willing to consider a post in government to revive economy

Delays in LP gas distribution; Litro asks public not to stand in queues