Written by:chanaka inojPosted on:14th June 2021
Ahead of the first-ever World Test Championship final, the ICC has inducted a special list of 10 players into its Hall of Fame. From the Australian allrounder Monty Noble, who made his debut in January 1898, to Kumar Sangakkara, the Sri Lanka batting great who retired in August 2015, these ten players’ careers span well over a century of men’s Test cricket.
The inductees have been classified into five broad eras: Noble and Aubrey Faulkner from the pre-World War 1 period (early era), Learie Constantine and Stan McCabe from the period between the two World Wars (inter-war era), Vinoo Mankad and Ted Dexter from 1946 to 1970 (post-war era), Bob Willis and Desmond Haynes from 1971 to 1995 (ODI era), and Andy Flower and Sangakkara from 1996 to 2015 (modern era).
The new list of inductees shows a notable skew towards allrounders, with Noble, Faulkner, Constantine and Mankad counted among the great multi-disciplinary players of all time, and Flower and Sangakkara also fitting that bill as wicketkeeper-batters.

South Africa, allrounder, 1906-1924
Faulkner was one of the legendary quartet of googly bowlers – the others were Reggie Schwartz, Bert Vogler and Gordon White – who starred during South Africa’s pathbreaking 4-1 win over England in 1906. Faulkner played 25 Test matches in all, scoring 1754 runs at 40.79 and taking 82 wickets at 26.58. Of all allrounders with at least 1000 Test runs and 50 wickets, Faulker possesses the fifth-best average difference of all time.

West Indies, allrounder, 1928-1939
Constantine was one of West Indies’ two greatest players – the other was George Headley, who was inducted into the Hall of Fame in 2009 – between their inaugural Test match in 1928 and the cessation of international cricket due to World War 2. Known for his innovative batting, skillful fast bowling and electric fielding either at cover point or close to the bat, Constantine scored 635 Test runs at 19.24, including four fifties, and took 58 wickets at 30.10. He made even more of an impact off the field, perhaps, qualifying as a barrister, entering politics, and serving as Trinidad & Tobago’s High Commissioner to the United Kingdom from 1961 to 1964. He was knighted in 1962, and in 1969 became the first black man to sit in the House of Lord’s.

Australia, batter, 1930-1938
McCabe was perhaps Australia’s second-best batter in the Don Bradman years, scoring 2748 Test runs at 48.21 including six hundreds. Three of them have gone into legend: the daring 187 not out full of hooks and pulls against England’s Bodyline bowling at the SCG in December 1932, an unbeaten 189 in Johannesburg in 1935, to bring Australia within touching distance of a target of 399 before bad light brought the match to a premature close, and 232 at Trent Bridge during the 1938 Ashes, an innings that made Bradman shake his hand and tell him, “I would give a great deal to be able to play an innings like that.”

India, allrounder, 1946-1959
Mankad was India’s greatest allrounder before Kapil Dev, a tireless left-arm spinner and a right-hand bat who often opened the batting. His 44 Tests brought him 2109 runs at 31.47 and 162 wickets at 32.32, and his most heroic performance, at Lord’s in 1952, has gone down as “Mankad’s Test”: 72 and 184 at the top of the order, and 5 for 196 across 73 first-innings overs. Earlier in the same year in Madras (now Chennai), he picked up 12 wickets against England to bowl India to their very first Test win. Madras was also the venue of Mankad’s 413-run opening partnership with Pankaj Roy against New Zealand in 1956 – it took until 2008 for a first-wicket pair to break that record.

Ted Dexter
England, batter, 1958-1968
Dexter was one of England’s most attractive post-war batters, a powerful driver who scored 4502 runs in 62 Tests between 1958 and 1968, at an average of 47.89. He was the Conservative Party’s (losing) candidate for parliament from Cardiff South East in 1964, when he was still playing for (and captaining) England. His post-playing career took him into journalism and broadcasting, before he returned to cricket in 1989 to serve terms as England’s chairman of selectors and president of the MCC among other roles. He continues to keep a close eye on the game, most recently bemoaning the techniques of England’s young batters in a letter published in this month’s edition of The Cricketer.

England, fast bowler, 1971-1984
Willis, tall and fast and generating awkward bounce that troubled all the best batters of his era, is currently England’s fourth-highest wicket-taker, with 325 at an average of 25.20. Having undergone operations on both knees at just 26, he willed himself through pain to play 90 Test matches and bowl numerous match-turning spells, none more memorable than his fourth-innings 8 for 43 to complete England’s Headingley miracle during the 1981 Ashes. After his playing career wound down, Willis enjoyed a long career as a trenchant voice in the Sky commentary box. Following a short illness, he died in 2019 at the age of 70.

West Indies, batter, 1978-1994
Haynes was one half of Test cricket’s most prolific opening partnership, combining to add 6482 runs and 16 century stands for the first wicket with Gordon Greenidge, a 2009 Hall of Fame inductee, laying the platform for West Indies’ most dominant era as a Test team from the late 1970s to the early 90s. A powerful back-foot player with great powers of concentration, Haynes scored 7487 Test runs at 42.29, and also enjoyed a superb ODI career, his 17 centuries a record in the format until Sachin Tendulkar went past it in 1998.

Zimbabwe, wicketkeeper-batter, 1992-2003
Flower remains arguably the greatest player in Zimbabwe’s history, scoring 4794 Test runs at 51.54 including some of the grittiest knocks ever played in the modern era, including a match-saving unbeaten 232 against India in Nagpur in 2000, and twin hundreds in a losing cause against South Africa, in Harare a year later. Flower’s international career came to an end during the 2003 World Cup, when he and the fast bowler Henry Olonga wore black armbands during all of Zimbabwe’s games to protest what they termed “the death of democracy” in their country. He continued playing county cricket in England thereafter, before turning to coaching and masterminding England’s climb to the No. 1 ranking in Test cricket in 2011.

Sri Lanka, wicketkeeper-batter, 2000-2015
Sangakkara is Sri Lanka’s leading run-getter, with 12,400 runs at 57.40 – the highest average among all batters to have scored more than 9000 Test runs. A left-hander who batted with a methodical elegance, Sangakkara’s numbers as a specialist batter are even more astonishing: 9283 runs at 66.78, with 31 hundreds in just 86 Tests. A prolific white-ball player too, Sangakkara was a leading light in the Sri Lanka teams that finished as losing finalists at the 2009 and 2012 World T20s as well as the 2007 and 2011 World Cups, and the Player of the Match when Sri Lanka beat India in the final of the 2014 World T20 in Dhaka. As eloquent off the field as he was chirpy behind the stumps, Sangakkara in 2019 became the first non-British person to be appointed president of the MCC. 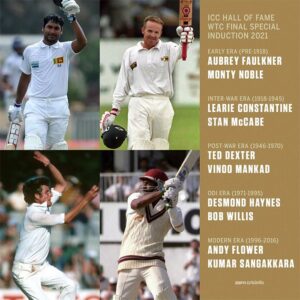 (LANKAPUVATH | COLOMBO) –The Governor of the Central Bank says that Sri Lanka’s negotiations with the International Monetary Fund (IMF) is making good progress and that an IMF delegation is expected to visit the island by the end of August to reach a staff-level agreement.

Full commitment of the public service is essential to an independent judicial process, state officials informed