Du Plessis, who represented the winning team, Chennai Super Kings, of recently-concluded IPL 2021, will join Jaffna Kings as an Overseas Icon Player ( Pre-draft). He is an international cricketer and former Captain of the South Africa National Cricket Team. Du Plessis is a skilled right-handed top-order batsman, considered as one of South Africa’s most consistent. He was part of the South Africa Test squad that turned the tide in the match against England in mid-2012. Faf made use of his exceptional talents in a number of T20 matches which ultimately made him the Captain of South Africa in 2013.  He led South Africa in two World T20 campaigns, in 2014 and 2016 following which he took over the South Africa’s full-time captaincy in all formats of the game in 2017. He became the second highest run getter in IPL 2021 scoring 633, only two runs behind Ruturaj Gaikwad who became the orange cap holder. With ample experience in international league tournaments Du Plessis will become the ideal fit for Jaffna Kings to face the fierce competition in the upcoming LPL. 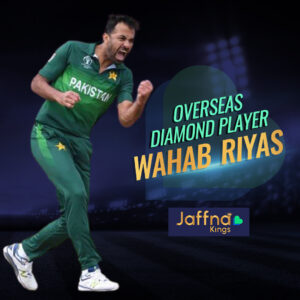 Wahab Riaz from Pakistan joins Jaffna Kings as an Overseas Diamond Player (Pre-draft). He is a gifted left-arm fast bowler and a right-handed batsman who played in many T20 Cricket Franchise Tournaments. He is reputed to be one of the fastest bowlers hurling at 150 km/hr. On his Test debut, against England in 2010, Riaz took 5 for 63, becoming the ninth Pakistan bowler to take five on debut. During the 2011 World Cup, Riaz had scalped a fifer in the semi-finals against India.

His all-round performance in ICC Cricket World Cup in 2015 earned Riaz world-wide recognition. He has played in three T20 World Cups during which numerous cricketers and cricket lovers applauded his unparalleled performances.

Forming such international partnerships, Jaffna Kings is gearing up to face the heated competition in 2021 LPL.

(LANKAPUVATH | COLOMBO) –The Department of Immigration and Emigration announced that the Issuance of Passports under the one-day service will be commenced with effect from 04th July 2022 at the Regional Offices in Matara, Vavuniya and Kandy.

One day service for passports extended to 3 more districts

DMT to provide limited services due to fuel shortage

Foreign Ministry restricts consular services to only 3 days a week

‘One Country, One Law’ Task Force hands over report to President