(LANKAPUVATH | COLOMBO) –External Affairs Minister (EAM) Dr. S.Jaishankar concluded his first day of discussions during his visit to Sri Lanka on 28 March 2022. He is accompanied by a five-member official delegation from Ministry of External Affairs, New Delhi for the bilateral and BIMSTEC engagements.

EAM joined H.E Prime Minister Mahinda Rajapaksa at a special event held in Temple Trees to virtually inaugurate the Jaffna Cultural Center. They watched a cultural performance at the Center – a Bharatnatyam rendition, a prayer dedicated to the peoples of India and Sri Lanka and their eternal friendship. They also had a virtual tour of the Artificial Limb Fitment Camp in Jaffna which is supported by GOI. In addition, they also witnessed signing of MoU on implementation of grant assistance from India to promote Buddhist ties between India and Sri Lanka. Further, there was an exchange of notes on the amendment to Article IX of the MoU on construction of Jaffna Cultural Center.

EAM met Finance Minister Hon. Basil Rajapaksa in the morning, who stressed the significance of deeper economic engagement between the two neighbours at a time when the impact of COVID-19 is still being strongly felt. EAM reiterated that India’s partnership with Sri Lanka was rooted in the ‘Neighbourhood First’ approach and S.A.G.A.R (Security And Growth for All in the Region) doctrine. India has stood by Sri Lanka in the hour of its need. 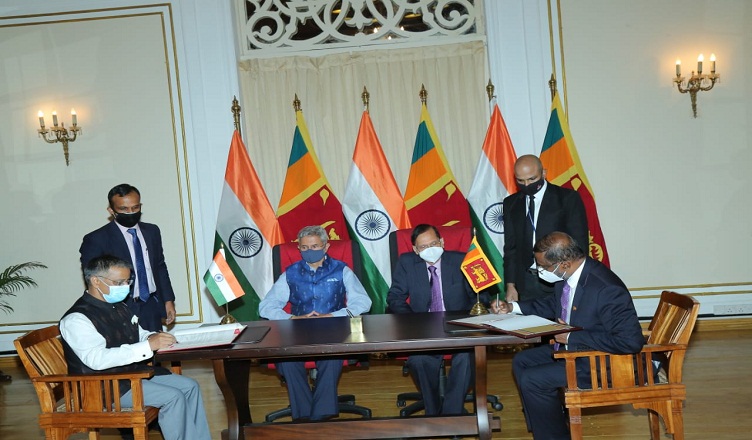 Foreign Minister Prof. G.L Peiris held talks with EAM in the evening. They covered the entire gamut of bilateral engagement. Attesting to the comprehensive nature of bilateral ties, they also witnessed the signing of bilateral documents in diverse areas:

iii) MOU on implementation of Hybrid Power Projects in three Islands off Jaffna;

iv) MOU on cooperation in development of Fisheries Harbours in Sri Lanka;

v) MOU for the establishment of Modern Computer Labs and smart boards with customized curriculum software in 200 schools in Galle District; &

EAM’s other engagements included a visit to HCL Technologies, an LIOC petrol station, and discussions with leaders representing various Tamil political parties. It may be recalled that HCL Technologies has created more than 1,800 jobs locally. LIOC has been at the forefront of energy cooperation between the two countries since its incorporation as a Sri Lankan Company two decades back.

Jaffna Cultural Center is a glowing example of India-Sri Lanka development partnership. It was conceived as a reconciliation project primarily aimed at expanding cultural infrastructure for people of Northern Province. This state-of-the-art facility, constructed with grant assistance from GOI, consists of multiple facilities such as a museum of two floors; an advanced theatre style auditorium for more than 600 people; a 11-storeyed learning tower; a public square which could also act as an amphitheater; etc.

EAM will be attending the BIMSTEC Ministerial Meeting on 29 March 2022.

(LANKAPUVATH | COLOMBO) – Minister of Power and Energy Kanchana Wijesekera says that a spot tender has been advertised following the international competitive bidding method for the supply of 300,000 metric tonnes of coal.

Global Entrepreneurship Week to be hosted by ICTA

India is resolved to create more capacities for global good

President to leave for Japan today

Aeroflot to resume flights to Sri Lanka in October